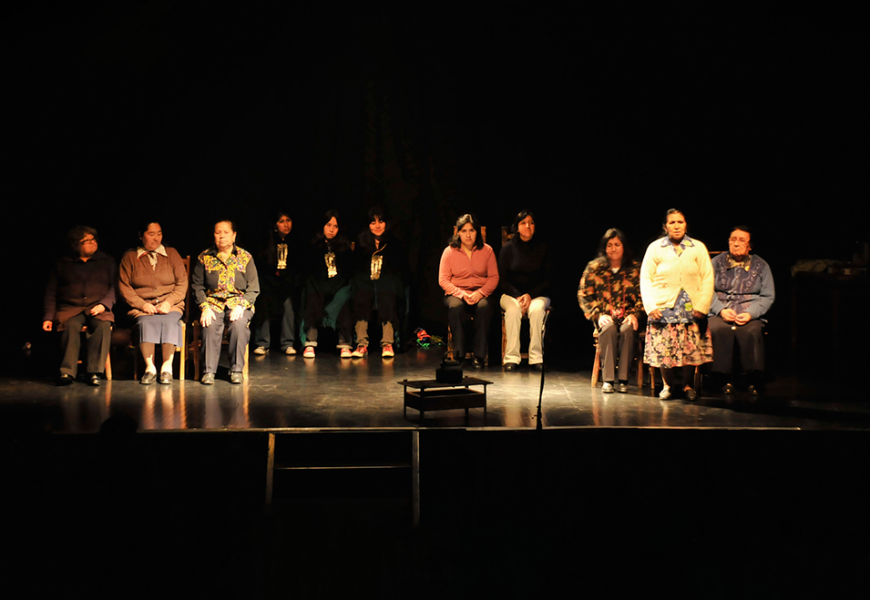 The Mapuche dramaturgy published during the last years in Chile is characterized by the presence of a rich selection of poetic, visual, sound languages and embodied acts which generate, record and transmit knowledge.

Ñi pu tremen, My ancestors is a documentary theater by playwright Paula González Seguel, premiered in 2009, in which women from the Petu Moguelein Mahuidache Mapuche1 community and the elderly women’s club called Flor de Invierno, both from El Bosque city, located in Santiago de Chile. There are eleven women who, spinning wool or sharing a round of mate, narrate fragments of their life on stage, as testimonies of the memory of a country. The play is staged in a ruka2 which is the traditional home for Mapuches, and is accompanied by music inspired by the intangible heritage of the Mapuche people, with themes performed with their own instruments such as kultrun3, trutruka4, trompe5, chajchas6 and kaskawilla7, together with some instruments from other cultural traditions such as traverse flute and guitar.

During the staging of these testimonies -with passages in Mapuzungu8– the tensions faced by the Mapuche people and the discrimination, of which Mapuche women have been victims during the rural-urban migration stage and adaptation to the new inhabited territory, are revealed.

Patricia Henríquez Puentes and Mauricio Ostria analyze the work of Paula González Seguel, as this “repertoire of scenic practices and documents of high ritual symbolic value that lead the spectator-reader to dislocate the vision and the thought regarding the Mapuche culture, to approach the profound and radical sense of its difference.

Thus, the researchers explain that the eleven non-actress women, protagonists of the play, generate “a sense of belonging to the territory, the ancestors, the community values ​​and the ways of living and seeing. This way, through the scenic autobiography, these body-confession, in which the experience is written even when it has not been told yet, bear witness to themselves, reminding the spectators the sense of identity loss and their chances of recovery.

Thus, each component of the scenic practice generates and transmits knowledge at the same time, turning the very bodies of the eleven women into files that rescue the memory of their people. “They do not ‘interpret’ a reality, but they experience it again through the scenic exercise of recalling the memory and reliving its effects, passing through the heart, through the gestures and movements”, explains Henríquez Puentes and Ostria.

Another example is that the play has been conceived to take place in a ruka, “a culturally complex space, where the expectator is invited to enter to experience it simultaneously as imagined and remembered. The stagin
g of the play does not annul the meaning possibilities of the ruka, regarding its original function, but rather intensifies its spatial performativity to overlap the real and the imaginary”.

To these elements -the bodies of the non-actresses and the ruka- are added a series of acts in front of which the spectator takes part through all the senses. It occurs specifically when women spin, drink mate9 and eat sopaipillas10, while listening to Mexican music, and clapping is accompanied by those who are dancing the cueca song “¿Para qué me casaría?” de Violeta Parra (“Why would I get married” by Violeta Parra). It is also seen dancing a purun, and interpreting an eyutun, song of the Machi that, accompanied by horn and guitar, allows a prayer to be celebrated towards the sun rises and the puel mapu. The play, in this sense, becomes a ritual where the spectators also participate, therefore, it is framed in an atmosphere of special smells, “such as the one caused by the stove, the ruka straw and the food preparation; of a particular lighting, such as the one that allows the only opening of the ruka, the door; the word power in Mapudungun which enunciates sentences; the movement of the body through dance and sounds, through music proposed by a Mapuche sound space”, the research details.

This way, and as the researchers Henríquez Puentes and Ostria González conclude, “in a narrow braid, the archive and the repertoire dialogue here, the supposedly unchangeable support of dramatic and poetic writing, together with the fleeting, the scenic, whose support is the body in movement, driven by voices, sounds of musical instruments and a visual composition full of ritual meaning. The presence of a selection of poetic, visual and sound languages ​​and of “embodied acts” in Mapuche dramaturgy operates as a mnemonic reserve of what is lived and experienced in rituals, therefore, of the archive’s ritual scenic power.

1 Mapuche: Said of a person: From an Amerindian people who, at the time of the Spanish conquest, lived in the central and south-central region of Chile.

3 Kultrun: or Cultrún. Musical instrument of Mapuche shamanism. It is a wooden kettledrum made from a large bowl, made from the trunk of a tree of power that represents the earth.

4 Truturka: or Trutruca. Instrument, used by Mapuche people, composed of a cane or coligue three or more meters long, hollowed out, and at the end of which, in Spanish times, a new beef horn or ñocha leaves were placed.

5 Trompe: A mouth harp is a type of metal or bamboo lamellophone. It is also known as “guimbarda”, “birimbao”, “trompe”, “jew’s harp” (in English)

7 Kaskawillas: or cascahuillas are a percussion instrument of Mapuche music. It is a typical instrument in force in the Mapuche area. It is used as an accompaniment when the cultrún is played in religious ceremonies.

9 Mate: infusion made with yerba mate leaves, a plant native to the river basins of Argentina and Paraná.

10 Sopaipilla: Fried dough, very popular in the Argentine region of Cuyo and in central Chile, made with flour, lard, fat or oil, and pumpkin. 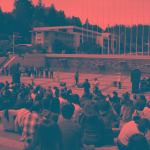 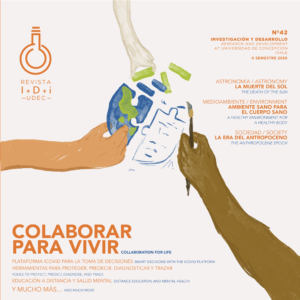